I got a text from Lee a few days ago. It was a photo from the fountain at the mall and the comment, “I haven’t seen John yet.” 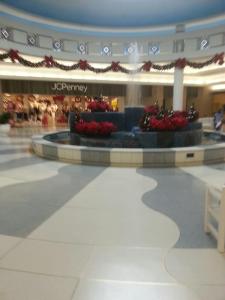 All through Advent this year, the whole time I’ve been writing about visits to the mall and conversations with John, Nancy has been recovering from a sprain. She hasn’t been walking for exercise anywhere. And a couple friends have wondered how I could be writing about these conversations.

So I’m not sure how to answer the question, “Did you really see Saint John of the Mall?”

The idea for the series started sometime in October. I decided that I wanted to do something new for Advent this year. I knew that Advent is less about the run-up to the first Christmas than about the Church’s expectation that the world hasn’t seen the last of Jesus. I realized that the apostle John is the perfect person to talk about both advents, since he lived for years and years after the resurrection.

And then one day I thought, “What if the old guy at the mall is Saint John?”

Because there has been, for the past couple years, a man at the mall, sitting on a bench anytime we showed up to walk. If I had to guess, I’d guess that he needed to get out of wherever he stays. And the mall is warm.

I realized that being stuck at the mall would be a little like being exiled on the Island of Patmos.

I think that there are more conversations with John that haven’t been recorded yet. They will probably find their way into an ebook. And it’s possible that Saint John of the Mall will still be around during Lent.

And it’s possible that some day there will be a resource called “surviving advent.” Because, after all, that’s what we’re doing in this time between back then and someday.

3 thoughts on “about Saint John.”