“Why did people accuse you of lying?” I asked Paul.

The question caught him off guard. He was sitting in my grandfather’s rocking chair, holding a cup of coffee, humming. 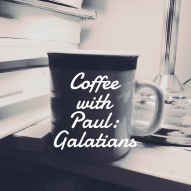 While he tried to get focused on what I was saying, I looked at him. His hands, wrapped around the mug, were surprisingly scarred and gnarled. Like my grandmother’s hands, stiffened by arthritis and her years of work in kitchens. I would have thought that a writer and tailor would have more delicate hands. Until I remembered that a tent-maker would have been working with tough materials. Hides for sides, leather thongs as thread. And when he had been stoned in Lystra, the rocks would have hit his hands as he shielded his face.

“Why do you think I said ‘See what large letters I use as I write to you with my own hand’? ” he said, catching me off guard. “I know that people have theorized that I had eye problems or something. But if they would just think about what these hands had been through, they’d understand why I dictated so often.”

“So, why did people accuse you of lying?” I said again. My tone was a little more gentle this time.

“Are you asking because I defended my claim to not have been mentored in Jerusalem?”

I nodded. “‘I assure you before God that what I am writing you is no lie’ sounds a little defensive. I mean, my middle school math teacher used to say, ‘he that excuses himself, accuses himself.'”

Paul smiled. “I think she may have been talking about something else. But I was making a case, building an argument. And there were people on the other side who had raised questions about my authority. So everything I’ve written from the beginning of the letter, I’m saying in the presence of God, at the calling of God, about the revelation from God, of the Gospel of God. No lie.”

Saint John of the Mall

Are you feeling disillusioned this Christmas? Do you need help to focus on what really matters? What if you could talk with a friend of Jesus and ask how he feels about Christmas?

In Saint John of the Mall you will experience 26 conversations with Saint John, a white-bearded man at a shopping mall, that will lead you to peace and ease your frustration.

Like you, Dr. Jon Swanson, a pastor and professor, has often been frustrated by Christmas. Let him (and Saint John) help you find hope and rest this Christmas.